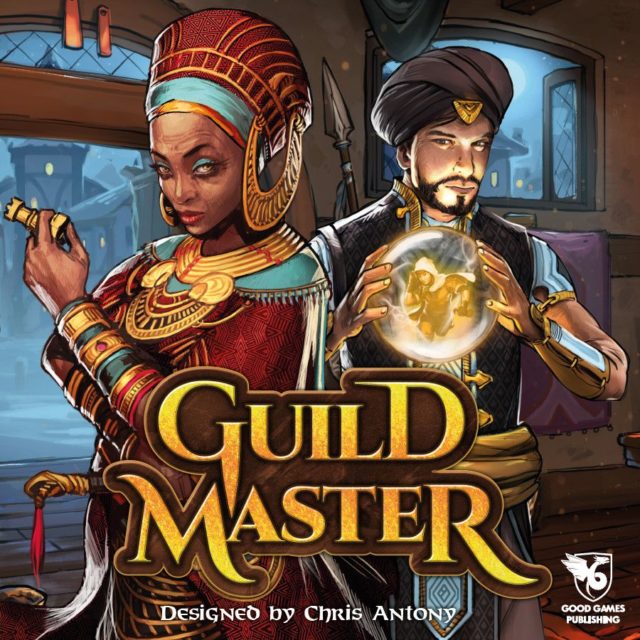 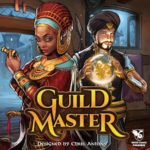 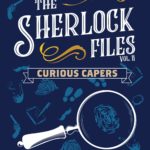 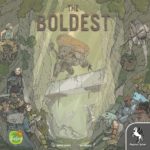 Guild Master is a highly rated intense 2 to 4 player game for ages 13 and above that takes around 2 hours to play.

Guild Master is a fantasy tabletop game for 2-4 players. Players manage an adventuring guild, competing with each other to become the most famous guild as an escalating series of events threaten the land. In each of the nine rounds, players simultaneously and secretly program orders to send teams of adventurers out to do the following:

Recruit more adventurers.
Attempt increasingly difficult contracts to gain money, fame and other rewards.
Hire builders to upgrade their guild to increase their capacity to do all of that more.
All players then sequentially resolve their planned orders, starting with each players’ 1st order, then 2nd order and so on, and in the order they appear on the board (builders, then adventurers A-F then contracts 1-6).
Players plan and program orders carefully around other players’ likely moves, various strategies, risks, and rewards. They manage their guilds’ growth and optimize combinations between their adventurer abilities and contract rewards to achieve their goals. As the game advances, guilds become more powerful and must rise to meet an increasing number of game state changing threats. Recruiting increasingly powerful adventurers and upgrading your guild capacity are both key to victory. There are various ways to exert control over the board, your dice rolls, and your chances to get what you want.
Most orders are resolved by paying coin or rolling dice based on your adventurers’ skills. Sometimes players resolve these orders alone, and sometimes cooperating with, or in conflict with, other guild’s adventuring teams attempting the same thing at the same time. When players’ orders overlap, coins and negotiated prisoners’ dilemma cooperate/conflict skill checks resolve the contest. Negotiation over shared goals, contract bonuses and reward splits is encouraged and rewarding, but not absolutely required to win.
Everything you do earns you fame (victory points) and other rewards. At the end of nine rounds, any remaining coins are converted to fame at a rate of 5 coins = 1 fame. Then any special prestige upgrade fame is added. The most famous guild is then declared the winner.

Be the first to review “Guild Master” Cancel reply