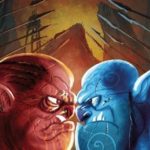 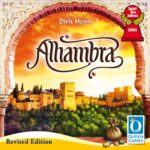 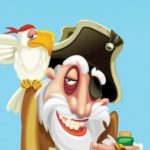 ORC is a neat quick 2 player game for ages 8 and above that plays in about 10 minutes.

Hook: A 2 player battle of hand management and timing.

ORC is a short game consisting of 6 battles.
On your turn, you must perform the following actions in order:
1. Deploy Orcs: Play 1 card from your hand to a Territory that has not yet been conquered.
2. Draw Weapons: Choose ANY Stockpile(s). Draw card(s) as follows:
A. Draw 1 card into your hand if you deployed 2 Orcs.
B. Draw 2 cards into your hand if you deployed 1 Orc.
A Territory battle occurs immediately after the Stockpile next to a Territory is exhausted. Then, players total their deployed Orcs at that Territory, and a victor will be declared. Orcs that fight in battle will not score points, they only help conquer Territories. Scoring occurs at the end of the game, when all Stockpiles have been exhausted. The player who conquers the most valuable Territories and holds native Orcs in their hand (matching those lands), is the winner!
From The Box: Players use Orc clans to dominate territories and earn the most victory points in this strategy game for 2 players. You’ll need to carefully plan your attacks and balance your clans in order to win the game!
Number 9 in the Pack O Game series.