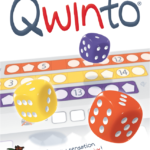 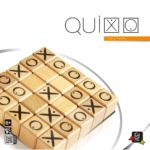 Qwinto is an amazing quick & light 2 to 6 player game, for ages 8 and above that takes around 15 minutes to play.

Players in Qwinto all play at the same time, with everyone trying to fill the rows on their scoresheets with numbers as quickly — and as highly — as possible in order to score the most points.

To set up, each player receives a scoresheet that contains three colored rows of shapes (mostly circles with a few pentagons); the rows don’t completely overlap, but they do overlap enough to create five vertical columns of three shapes, with one pentagon being in each vertical row.
On a turn, a player rolls 1–3 dice, with the dice being the same colors as the rows: orange, yellow, purple. Each player can place whatever sum is rolled into an empty shape in a row that matches the color of one of the dice. Two rules must be followed when placing a sum in a row:
All numbers in a row must increase from left to right.
No number can be repeated in a vertical column.
A player does not have to enter the number in a row, but if the active player, the one who rolled the dice, doesn’t do so, then they must mark a misthrow box on their scoresheet.
The game continues until someone has filled two rows on their scoresheet or someone has tallied four misthrows. Players then tally their points: For each completed column on their scoresheet, a player scores points equal to the number in that column’s pentagon. For each completed row on their scoresheet, a player scores points equal to the rightmost number in that row. For each incomplete row on their scoresheet, a player scores one point per number in that row. For each misthrow, a player loses five points. Whoever has the highest sum wins!