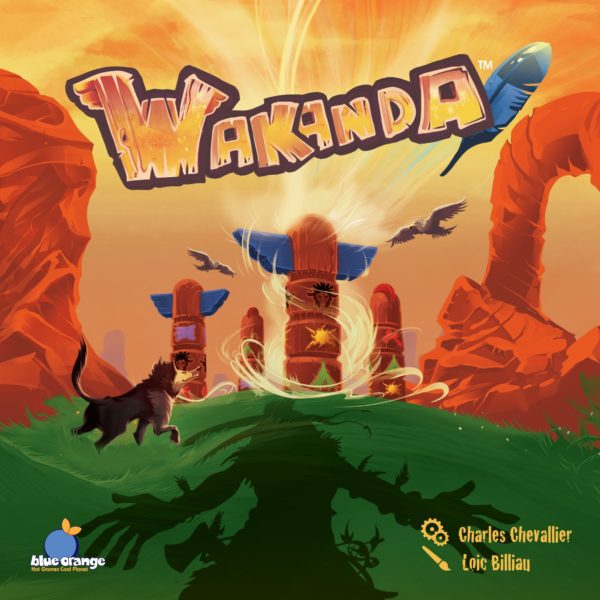 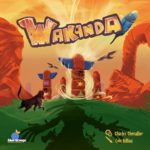 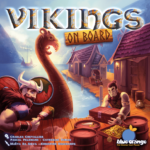 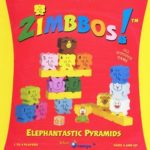 Wakanda is an amazing quick 2 player game, for ages 8 and above that takes around 15 minutes to play.

Every one hundred moons, members from different tribes gather to sculpt new totems. The totems they create represent the values of their family, village, courage and culture. The tribe that makes the most prestigious totem poles wins the contest…

In Wakanda, players compete to create valuable totem poles, but the value of the poles is determined as much by where they stand as by what’s in them. Each player starts the game with three headdresses. Six of eight village tiles are placed in a row, with three of the tiles tilted 90º to show that they’re out of play; each tile has a unique scoring rule on it, and that rule will apply for all of a player’s totem poles if he acquires that tile.
On a turn, a player first draws one totem pole from the bag; the game includes 21 totem pole pieces: one eagle, two chiefs, three tomahawks, four animal skins, five teepees and six suns. The player then either places one of his totem pole pieces on an available village tile OR places one of his headdresses on an existing totem pole to claim it; in the latter case, he places this tile in front of himself and tilts the next village tile in line (if any) to make it available for play.
Once all six poles have been claimed, the players tally their score based on the rules on their tiles, e.g. score 3 points per animal skin on all of your poles or score 2 points per piece for your tallest pole. High score wins.

Be the first to review “Wakanda” Cancel reply